The book is a collection of the most impactful papers written by Rogers over the course of decades centered around the idea of becoming.

Life is guided by a changing understanding of and interpretation of my experience. It is always in process of becoming.

I very much enjoyed Roger's optimistic outlook on people. I like how he presents his thoughts, and that he focuses on relationships and their role in people and society's functioning.

The method he and his co-workers used to measure psychotherapy's effectiveness on people is noteworthy. The team prepared a set of one hundred cards to represent different aspects of a character through adjectives and phrases that participants of psychotherapy used to describe themselves most often. On a schedule, they asked study participants to distribute these cards into ten piles — ranging from "certainly about me" to "totally not about me." During the whole experiment, participants were asked to put a specific amount of cards into each pile — following a normal distribution. By enforcing this rule and using the same set of cards for every measurement and participant, researchers ensured an easy comparison. Essentially, they vectorized each measurement, turning it into a set of numbers. By doing so, they were able to, quite easily, compare states of the same person's psyche at different times or even one person to another. And this is not an easy task to achieve.

The overall level at which this experiment was conducted impressed me, specifically, the researchers even controlled for the effect of actual desire to receive psychotherapy. In addition to that, they took measurements of people's ideal self (besides their self-perception) and had a group of independent psychologists profile study participants the same way by "distributing cards" based on the recordings of interviews with the aforementioned participants to allow for an outside view on them.

I like Rogers' outlook on people the most because he values each person and sees an opportunity for constructive improvement in everyone. This resonates with me a lot. And I believe this outlook — being open and kind to people — brings an actual positive change in people and society. As someone once said, "kindness goes a long way." The most significant bit is when someone receives this kind treatment, they feel more comfortable and can act freer and more creatively; it sets off a chain of positive reactions and helpful changes in them, leading to more fulfilling and happy relationships and society.

Now I want to talk about an idea of Rogers that I don't quite understand. In the later part of the book, Rogers starts talking about the behavioral sciences and their implications for society. And you can tell that he is afraid that the products of developed behavioral sciences will create an anti-utopian society thoroughly controlled by these products.

Aldous Huxley, in his Brave New World (1), has given a horrifying picture of saccharine happiness in a scientifically managed world, against which man eventually revolts. George Orwell, in 1984 (5), has drawn a picture of the world created by dictatorial power, in which the behavioral sciences are used as instruments of absolute control of individuals so that not behavior alone but even thought is controlled.

He continues by talking about causality regarding human behavior and how those who understand the laws behind it can affect it. He is afraid that this control will not allow society to be creative, and creativity, as he says, is required for us to survive in the "brave new" technological world that we are building. From there he gradually goes to the question of free will, asking if there actually is causality in human behavior and whether a human can even be creative. What does it mean to be creative, he asks. To which he responds that, yes, a human can be creative, and there is free will. To illustrate his point, Rogers draws to the scientific method, which is, in essence, a controlled process focused on finding causality laws. At the same time, researchers freely choose how and where to apply this method. Therefore, this is an example of free will in action determining the outcome of specific research. Or, at least, this is how I understood his position regarding this question. This last point, this example, is the one I don't get. I cannot agree with it. It looks to me like Rogers deliberately excludes the researcher and the outside world from the "causality system" during the thought experiment. From my perspective, the researcher is part of a bigger system, and his life and decisions are affected by societal, economic, and cultural influences. Consequently, there is a cause for his actions and decisions; the only thing is that we don't always grasp it.

In short, can science discover the methods by which man can most readily become a continually developing and self-transcending process, in his behavior, his thinking, his knowledge? Can science predict and release an essentially “unpredictable” freedom?

John Dewey’s statement: “Science has made its way by releasing, not by suppressing, the elements of variation, of invention and innovation, of novel creation in individuals.”

Rogers ends the book on the paradoxical and optimistic note that is summed up very well by the following excerpt:

Or at the other end of the spectrum of choice we can choose to use the behavioral sciences in ways which will free, not control; which will bring about constructive variability, not conformity; which will develop creativity, not contentment; which will facilitate each person in his self-directed process of becoming; which will aid individuals, groups, and even the concept of science, to become self-transcending in freshly adaptive ways of meeting life and its problems. The choice is up to us, and the human race being what it is, we are likely to stumble about, making at times some nearly disastrous value choices, and at other times highly constructive ones.

Having said all of this, I highly recommend this thought-provoking, dense, relatively easy to understand book packed with ideas and information. Thank you for reading my impressions, and if you decide to read the book, I hope you enjoy it! :) 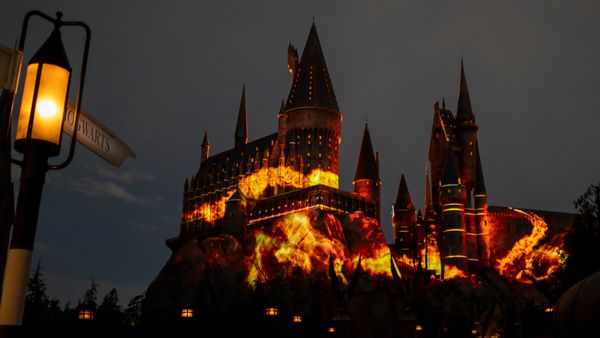 The cover picture was taken at Universal Studios Japan. Harry Potter and the Methods of Rationality is, by far, the best fanfiction I have ever read. And it is also one of the best science fiction books I have ever read. The story is set in a world familiar to